the heart of lucifer

Since the end of September 2016 I received a new type of attacks that aims the MIPS platform I provided to detect IoT attacks. I will call this threat as new ELFLinux/NyaDrop as per the name used by threat actor himself, for the “nyadrop” binary that is dropped in the compromised system.

This is not the “really” first time we’re seeing this threat actually, in this year, some small events was detected on having these attacks which I ignored for some reasons, and on May 22th, me and hFiref0x of KernelMode was in a convo regarding to the threat which was detected. It was obviously the same threat (proof is as per picture below, thanks to hFiref0x for the ping that time). 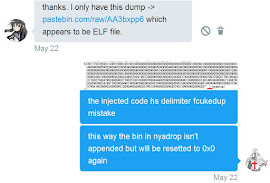 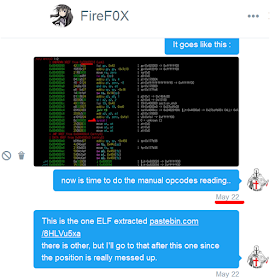 On May’s event, the attack was so poorly arranged so the infection wasn’t occurred due to the lack of UNIX background of the bad actor. And I did not want to post it in anywhere, hopefully he will be always as dumb as per that state.

In the end of September 2016, a wave of attacks using IoT known factory hardcoded default login credential that was recently exposed on some blackhat events, was raising a lot of ELF threat to “come back” and race to infect the known IoT vulnerable sector. And during the session, the Linux/NyaDrop‘s loader attacks was re-surfacing again, and this time it got better (a bit), so I decided to write in this post as public awareness. For the purpose I made forensic records since early Octtober 2016 for the conducted attacks on specific platform aimed, MIPS CPU architecture, implying routers and similar networking devices, with 32bit clock.

This post is informing you about the information related to the attack, records of several attack pattern, the dropped binary analysis in reverse engineering. You may can get the hazards to be use detect and mitigate the threat, and further precaution. The complete log is shared to law enforcement. Beforehand, I thank FreeBSD foundation to the free & open source platform which I conduct all of my research, radare2 for the one and only reversing platform I use, and Linux for the great OS that is successfully implemented into plenty of IoT, and also Mr.Michel Oosterhof for his effort in improving a good tool.

The detail is in the following sections..

There are some indicators that can be used to detect this attack, the first pattern is the login “Failed attempt” and then followed by the “Success attempt” of login credential of the aimed IoT. The time for getting success attempt is very short, indicated the bruce force work.

The Fail then success attempt can be shown as per below:

In this attack the credential “5up”, was used as first brute login.

The one shot attack with a success attempt can be shown as per below:

And below are the several pattern of failed attacks:

I think the last patterns is the most seen pattern by the honeypot users. You have to be as “cameleon” to Linux MIPS IoT system in characteristic to fulfill the herder’s checks for then he will “grant” you to the Linux/NyaDrop binary :-)

This attack was keep on coming while I was writing this blog:

Some points to be noticed in these attacks are: